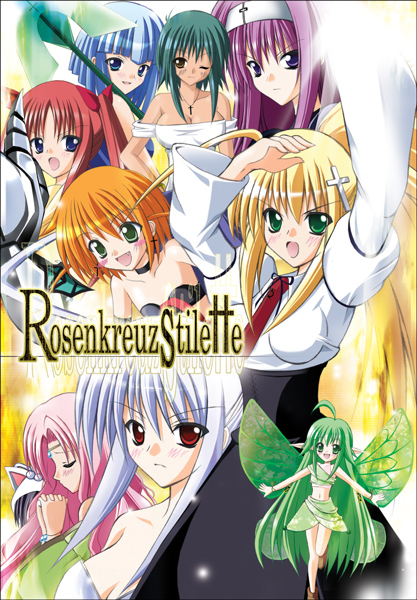 In an sea of endless Mega Man games as far as the eye can, everywhere you look there's another Mega Man lurking in the shadows. So shouldn't it be time the series has meet its end already? ... Heck no. Besides, Mega Man rules. And it if weren't for him, we wouldn't have this little gem from [erka:es], Rosenkreuzstilette ~Blades of the Rose Cross~ for the PC.

So the basic promise of the story goes something like this: thousands of years, Magi, human beings born with the gift of magic roamed the earth. However, these born with such a gift where treated to a life of persecution, hatred, and being feared from the Holy Empire and the Orthodox Church. One great Magus and his eight disciples fought a great war against the Holy Empire and the Orthodox Church. In the end, that great Magus sacrificed his very life, but in the end, he succeeded in ending the persecution of Magi when Empire accepted them into their fighting force. Thus creating the RKS, Rosenkreuzstilette: the Blades of the Rose Cross.

Decades later, our heroine, Spiritia Rosenberg along with her fairy friend, Lilli, returns home after her six months of training and they are on their way to meet up with Count Michael Zeppelin's daughter, Iris Zeppelin. Upon their arrival and some idle chit-chat, Iris gets abducted by a dragon and makes off with her with Lilli in pursuit. Though it was not too soon when an attack out in the distance had begun. Spiritia and Lilli rejoined after the forest where fairies lived was set ablaze, and the culprit behind the forest burning was none other than Spiritia's childhood friend, Freudia Neuwahl. Freudia, and most of Spiritia's fellow Magi in the RKS have started a war against the Holy Empire and the Orthodox Church into creating a new world for Magi. Spiritia, like the girl scout that she is, refused to take part of the war. She was branded as traitor to the organization and now must put an end to this madness.

Rosenkreuzstilette, if you haven't guessed by now, is a Mega Man-clone based on the Mega Man games on the NES. So if you have played any of the Mega Man games on the NES before, you should know what the basic gist of the gameplay should be. But for the sake of convenience, I'll explain it to you anyway. In Rosenkreuzstilette, you must go through several stages and defeat the boss waiting at the end while taking enemies, dodging traps, and picking up power ups along the way. After defeating that boss, you get a new weapon. With that weapon, you could use it on a boss who could be weak against it, hence the rock-paper-scissors element of the Mega Man games. But when I say this is a Mega Man-clone, this is a Mega Man-clone. Right down to the old-school 2D gameplay, the menu screens, the difficult and challenging gameplay, and even the password system, Rosenkreuzstilette is perhaps one of the only Mega Man doujin softs out there that stays true to the original pedigree.

The visuals of the game are beautiful. The Castlevania- and Touhou-style setting and themes is a nice change of pace from the usual futuristic theme of the Mega Man franchise. The backgrounds and the beautiful settings has to be one of the visuals strongest points. Character, enemy sprites, visual effects, and the characters themselves are also wonderfully done. Rosenkreuzstilette also has a wide variety of stages; from graveyards, to sky palaces, and a factory filled with death traps, this is one visually pleasing game. Especially for those who loves old-school 2D games.

Audio for this also incredible. A rock-solid cast of Japanese voice actors coupled a great soundtrack of music ranging from haunting orchestral styles of music that of the Castlevania series to energetic music similar to Mega Man, you are bound to find a favorite piece of music somewhere in this game. Rosenkreuzstilette also has one of the most solid storytelling you'll find in any Mega Man game; a plot filled with betrayal, tested friendships and an unforgettable cast of characters, Rosenkreuzstilette has easily one of best storylines in a Mega Man-clone to date. The game, however, is Japanese. So for those can't read Japanese wouldn't understand a thing they're saying. But don't worry, there is an English-translation patch for the game made by the good people of Schwer and Schwer Alike and Darkside Translations and a Chinese-translation patch available.

Gameplay as mentioned earlier is derived from the NES Mega Man games while elements from later games in the series is apparent in Rosenkreuzstilette such as charging up weapons, sliding, switching between weapons on the fly, its all there. One thing that Rosenkreuzstilette does differently from the original Mega Man games is the Desperation Mode. Whenever a boss is half-way towards defeat, they will up the ante and perform different attacks from what they did before. This gives the boss battles in the game an extra edge when it comes to the challenging aspect of game and it helps makes the battles much more interesting.

Rosenkreuzstilette isn't just an homage to Capcom's fabled Blue Bomber; Mega Man X, Mega Man Zero, Castlevania, other various video and computer games series, and even a few anime series is paid homage in Rosenkreuzstilette as well. You can chose to play the game in Story Mode if you want to play through the game's storyline, or skip it altogether in Arcade Mode. And like other doujin soft out there, you can save snapshots and replays of the game and share them amongst friends.

Now for the downside. For starters, this is a Mega Man game, and if you've played Mega Man before, then you've already played Rosenkreuzstilette without even knowing about it. Not to say this totally a bad thing, but Mega Man has certainly been around much longer than Spiritia Rosenberg has. This is also, as mentioned before, a hard game. So to those who are complete novices to the NES Mega Man games (or any of the traditional Mega Man games for that matter), you might get frustrated dying over and over again.

But don't fret gamers, Rosenkreuzstilette is nowhere near the likes of, let's say, Twilight Frontier's MegaMari - Marisa's Ambition. Another cause of concern is the game's system requirement. You will (might) need a decent computer to run this game at its best. Otherwise, you might suffer through long load times and/or slowdown. Trust me, I've tried playing this on the computers at my school, which aren't that good of PCs, and it could happen to you.

Rosenkreuzstilette gets a 9 out of 10.

Posted by ViperAcidZX at 8:57 PM