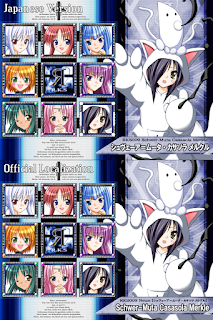 We appreciate the kind words you've been sending our way in response to the delays in the project.  To liberally paraphrase one of our partners, "you can complete a project quickly, you can keep your expenses as low as possible, and you can polish your work to a blinding sheen, but you can never do all three at the same time; pick the two that matter the most to you and accept that the third just isn't going to happen".  You already know which two we've chosen, and it's reassuring to know that you're supportive of our decision.

Onto today's Developer Diary entry.  The results of our poll are in, and an overwhelming majority of you wanted to have a look at the revised Stage Select Screen.  Those of you who wanted to see the new Stage Titles, don't worry: we'll be covering them next time, so stay tuned!

Rosenkreuzstilette's Stage Select Screen is actually composed of six different images working in concert:  the image background, the scrolling hexagram, the headshots of all eight bosses, the flashing cursor, the profile image of each boss, and the profile image's alpha mask (which specifies which parts of the image are transparent and which parts are opaque).  At the time of this writing, five of the six images have been revised; the screenshots in this post don't fully reflect how the final version will look (though they do give a pretty accurate idea of what to expect). 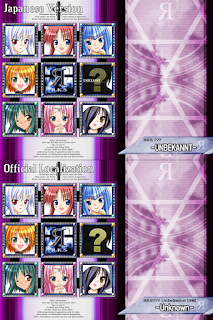 The biggest change to the Stage Select Screen is the one we're most satisfied with.  We've rearranged the characters' names, the Japanese rendition of their names, and their RKS ranks and callsigns in such a way that looks completely natural in English yet keeps their actual names at the forefront.  We started with Schwer-Muta's graphic since hers demanded the most visual real estate of the bunch.  Originally, we dropped the Japanese rendering of Schwer's name and replaced the Japanese text with the original German / English rendering, but that left too much empty space where her name used to be (in our discipline, we refer to this a "whitespace").  So, we decided to retain the Japanese and just swap the original and Japanese names, removing the whitespace and creating a much more balanced composition.  We were quite pleased with the result, so, from there, it was just a matter of updating the text accordingly for the remaining seven bosses.

However, this layout presented an interesting predicament.  Over the course of the four main "entries" in the series (Rosenkreuzstilette, Rosenkreuzstilette Grollschwert, Rosenkreuzstilette Freudenstachel, and Rosenkreuzstilette Weißsilber), there are a total of three bosses marked with the callsign "Unbekannt" (German for "Unknown").  I'm a stickler for consistency, so I'd naturally want to have these three bosses follow the same precedent as the others.  After a bit of brainstorming, we realized we were only one detail short of having everything we needed to have the three fall in line with the others: namely, the Japanese word for "Unknown", 「不明」 ("fumei").  With that one missing detail, all the pieces were in place, resulting in the screenshot you see above.  What do you think? 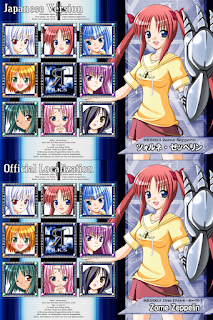 Changing gears: as you can see in the screenshot to the right, the official English name of the Count's lineage is now "Zeppelin".  When we first met with WOMI to discuss the project, I asked him flat-out about the naming scheme of the bosses and pointed out that "Sepperin" seemed like an "exception to the rule" in that scheme; it seemed to me that "Sepperin" was a misromanization of 「ゼッペリン」 ("Zeppelin" / "Zepperin"). WOMI surprisingly agreed with my remark and gave his blessing to canonically change the name "back" to "Zeppelin".

Some of you might be curious what kind of naming scheme Isemiya and WOMI had in mind when naming their characters.  Believe it or not, in the original Rosenkreuzstilette, all of the characters' surnames are the names of prominent German innovators, including inventors, toymakers, and game designers.  I can definitely tell one of the two is a huge fan of German board games:

The Zeppelin Clan (Zorne Zeppelin / Count Michael Zeppelin / Iris Zeppelin)
- The Zeppelins are named after Count Ferdinand von Zeppelin, a German noble, military general, and inventor of the line of airships that carry his name.

Trauare Wrede
- Trau is named after Klaus-Jürgen Wrede, a German game designer reknowned for Carcassone, The Downfall of Pompeii, Mesopotamia, and Rapa Nui.  Wrede is a big fan of Uwe Rosenberg and Klaus Teuber, and WOMI decided to make a clever in-joke about this little detail in his art:

Remember this piece of artwork featuring Spiritia and Luste in lingerie?  As it turns out, these clothes were gifts from Trauare (before anyone asks: yes, Trauare does swing that way).  Tia is legitimately embarrassed, but Luste, bless her tiny brain, never realized that Trau had sent the two of them underwear and not complete outfits. Trau never bothered correcting her because she thought the result was hilarious, and a world overflowing with sorrow (her words, not mine) could afford a laugh or two at one airhead's expense.

Oh, Trauare, you mischievous flirt.  It's no wonder they call you "the Siren"...

Luste Teuber
- Luste's namesake is Klaus Teuber, the man behind the extremely succcessful Catan series (The Settlers of Catan, The Rivals for Catan, The Struggle for Catan), and its many, many spinoffs.  He is also known for Pop Belly, Oceania, Hoity Toity (a.k.a. By Hook or By Crook), Barbarossa, Wacky Wacky West, Entdecker, and Domaine.

...All that and we're still only on the first element of the Stage Select Screen!  I could cheat a little and save the rest for another Developer Diary entry, but I may as well finish this entry off properly rather than drag it out (and, besides, I wouldn't have any new screenshots to go along with the new entries anyway...).

If you look closely at the two Rosenkreuzstilette screenshots (not the Grollschwert one), you might notice a slight difference in the Stage Select cursors.  We've completely redesigned the cursor to be a lot more subtle than its Japanese counterpart.  In the original Japanese version, the orbs in each corner and the "grill" on the left and right side of each headshot frame flashed white when the corresponding boss was selected; in our version, the entire frame flashes in grayscale, making the animation look much smoother overall.

The second tweak is far, far easier to miss.  Look closely at the orbs surrounding the Unbekannt headshot in the Japanese version.  Notice that ring of purple around the orbs left over from the orbs surrounding Grolla's headshot?  Now look at the official localization.  See the purple ring?  Oh, you don't?  Mission accomplished, then!

The background layer is the only portion of this graphic that has yet to be edited.  The text at the top and bottom of the screen is part grammatically-unsound German, and part Holy Scripture.  Yep, as if the religious overtones in Rosenkreuzstilette weren't obvious enough, there are verses from John 8:23, Genesis 3:19, and Psalm 40:7 right on the Stage Select Screen.

Using the localization of The Living Bible as a base, these verses can be interpreted as follows in English:

"Love.  Despair.
This is all that has ever mattered to him.
You shall have to work hard, and so too shall I.
You belong to this world, but I do not.
I have come, just as the prophets foretold."

Though it's unclear who exactly might be speaking this verse, those of us who have finished the game before know which of the characters might be prone to proclamations of divinity and pretentious prophesying.  As a bit of additional trivia: the phrase "das A und O" translates to "the Alpha and the Omega", yes, but this is a Greek expression that is often used out-of-context.  In Greek, this phrase means, "the end-all and be-all".  In French, we use the expression, "notre raison d'être" (our reason for existing) as an appropriate translation.  In English, it refers to a person's ultimate purpose; a goal one would sacrifice everything to accomplish.  In all honesty, I never would have expected to find foreshadowing on the Stage Select Screen of all places...  Those of you who have reached the game's "Our Princess is in Another Castle" moment know exactly what I'm talking about...

That wraps up today's addition to the RKS Developer Diary.  Next time, as promised, we'll take a look at some of the new titles for many of Rosenkreuzstilette's stages.