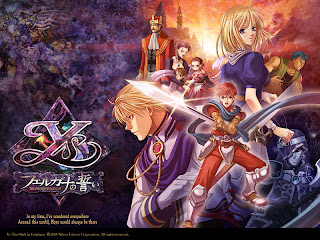 Long time no see, everyone!

Sorry for the radio silence on my end these past few months. It's a long story - one that sounds more like a third-rate soap opera than a half-decent excuse, so I'll spare you the details for the time being. Suffice to say, crippling real-life problems (and some inexplicable browser issues) have severely cut down on my online presence at Schwer and Schwer Alike for the past while.

On the bright side, the downtime has allowed a lot of projects-in-the-making to start to bear fruit. I'll be making an official announcement in the next few weeks about the ones directly related to Darkside Translations and our projects (naturally, that includes Rosenkreuzstilette). Before that, though, I'd like to shine a spotlight on a few developments that I'm sure those of you with good taste in entertainment can appreciate.

It's no secret that Ys is my favorite video game series of all time. As a huge fan of Castlevania, The Legend of Zelda, Metroid, Kirby, and Megaman, that's saying quite a lot. Long before Mint and I teamed up to localize Rosenkreuzstilette, I had the honor of working with Falcom Fan Translations' Jeff Nussbaum and Nicholas Livaditis to help bring the series to the English-speaking world. As you can imagine, we were psyched when XSEED Games announced that it had secured the English-language rights to the series' PSP entries, and I was even more excited to learn that they wanted to use Jeff's scripts for the official English versions of Ys I & II Chronicles and Ys: The Oath in Felghana.

I'm tempted to go on a fanboy rant here, but I think I'll let the games speak for themselves.

As of this writing, XSEED has released Ys I & II Chronicles (PSP), Ys: The Oath in Felghana (PSP / Steam), Ys Seven (PSP), and Ys Origin (Steam), as well as Falcom's amazingly well-written The Legend of Heroes: Trails in the Sky (PSP). I highly recommend checking them out.

You might remember that, back in May 2012, my friends at No Name Losers released a full English localization of the visual novel ef - a fairy tale of the two. What you might not know is that, since then, ef's original developers have joined forces with the group to give the title a commercial English release (NNL is officially "A division of minori Inc."). Moreover, several members of Darkside Translations are credited for their contributions (including yours truly, though my name only appears in the ending credits).

The first half of the story, ef - the first tale, goes on sale at MangaGamer.com today (warning: this link is not work-safe). If you missed the opportunity to check it out last time, you now have another chance.

I'll be at Otakuthon 2012 in Montreal next weekend (August 3rd through 5th), both as an attendee and as an event host (you can find me with my co-panelists at "An Introduction to Visual Novels" and "The 2011-2012 Visual Novel Review" - and, yes, Katawa Shoujo will be featured in both panels). If you're in the area, be sure to drop in and say "hi".

That's all for now. Once Otakuthon is out of the way, I'll get cracking on our next big announcement.

Now that the dust has settled, I've reactivated commenting. Please don't abuse this.
Posted by Letty Whiterock at 2:11 AM 3 comments:

Email ThisBlogThis!Share to TwitterShare to FacebookShare to Pinterest
Labels: blog

More changes to the blog are coming. You'll also be able to post comments again. Sorry about all this. Stay tuned. This post was literally a tweet.
Posted by Letty Whiterock at 3:57 AM No comments: