As if his LP wasn’t enough, JT was nice enough to draw some great Spiritia art for us! …So yeah. Enjoy it~

Remember JT? Of course you do. Well, he's back with the new Freudenstachel demo. Are you ready to hear frustration at its finest with one of the best voices ever? Watch the video below!

I’ve been making more social networking adjustments to the site, because I seem to think that it’ll actually do something. Who knows? Maybe it will! I’m hopeful, anyways. If you haven’t noticed already, there are now social buttons under the resources section of the sidebar. That way, you can more easily access our Twitter feed, the new Facebook page, or our Google+ page. My hope is that we can really improve Schwer and Schwer Alike to make it the best site it can possibly be for one of the best game ever to grace the doujin market. To our loyal SaSA readers and followers, as well as Rosenkreuzstilette fans in general, please spread the word. Oh, also, now that the social networking stuff is in place, maybe we can start holding contests a lot more easily? Also, feel free to communicate more with us. If you find some RKS art you want to share or maybe just want to tell us how awful we’re doing at our jobs, by all means, use the tools provided to let us know. Get the word out. We’re all fans of RKS, and without you guys, this place would be in vain. We exist for you guys.
Thanks a lot, everyone, and look forward to more updates in the future!
Posted by Letty Whiterock at 7:23 AM 3 comments:

More Icy Treasures from the Nile

Don’t ask how I got this. I’ll leave those surprises for later. Until then, enjoy this little preview. Also, as a note, Strudel does not function properly at all. I’m not entirely sure what she’s supposed to do, but she’s pretty worthless as she is right now. Oh well~

Shameless Plug for the VA Club

In response to a tweet by Kira Buckland, a great voice actress who is gracious enough to be a part of the RKS dub project, I’m going to be plugging the Voice Acting Club Forums. It appears to be a pretty active community with some pretty talented people behind it, and hopefully, we can find some more amazing people to help us get the RKS dub project pointed further in the right direction. So yeah, check them out, sign up, give some feedback, and have fun! Also, keep playing Katawa Shoujo. There will be a test at the end of the month on whether or not Lilly is the best character. (Hint: She is.)

Schwer reader and RKS fan Mhakk Como has been posting some interesting stuff on our SaSA Facebook group. A lot has changed in the newest web trial from the inside, so we can no longer access the other weapons due to exploiting the password system. However, Mhakk came up with a brilliant work-around. Using a replay from a previous demo build, we get to see Freudia try out some new weapons. The first one appears to be an updated version of Eis Lanze, and the second one looks like an icy version of Geister Wand. To be honest, that’s a little disappointing, but maybe there will be some special gimmick and not just a snowflake Schwer shield. The third one is a bit of an enigma. Supposedly, it’s what you get from Trauare, but we’re not really sure what it does. We’ll have to see what happens with that one. Finally, there didn’t seem to be any update on the weapon you get from Dolis. It’s still invisible, so we’re still left guessing. Still exciting, though!

The final release is just around the corner, and all our questions should be answered then! 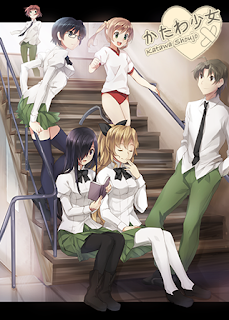 Comic Market has come and gone, and, unfortunately, [erka:es] wasn't among this year's attendees. In other words, Freudenstachel isn't ready for release just yet. Personally, I'd rather take my time and do things right than rush through and do a half-assed job, so I have to respect WOMI's course of action even if it means keeping us waiting a while longer.

Since I'm sure at least a few of you have more free time on your hands than you'd like, I have just the thing to keep you entertained in the meantime. The freeware visual novel Katawa Shoujo has just been released to the public today. Those of you that know me well are aware that I've been looking forward to Katawa Shoujo for a long time now, so I'm glad to see that the title has finally been completed. Normally, I'd gush over what it's about right now, but this is one case where I think the work speaks for itself.

Congratulations to the guys at Four Leaf Studios. I'm sure RAITA would be proud of what you've been able to accomplish. I certainly am. Bravo, guys!

Please note that if you aren't over the age of 18, then Katawa Shoujo probably isn't something you'd be interested in.