My apologies for the long silence.  As predicted in my last post, things have been pretty overwhelming in the other areas of my life these past few months.  Thankfully, things have returned to some semblance of normalcy (for the time being, anyway).  So, you know what that means: it's time for another entry in the RKSF Developer Diary!

This time around, we'll be having a look at the newcomers to Rosenkreuzstilette Freudenstachel.  Without further ado:

Well, since our favorite airhead is donning such a flimsy disguise (does she really think a visor can conceal her identity?), I may as well take the opportunity to shine a spotlight on the many aliases she uses.

Throughout the game, Luste adopts a handful of names for her superhero persona.  "The Metal Hero" (「メタルヒーロー」), "Bluste" (「ブルーステ」), "The Hero of Justice (?)" (「正義のヒーロー（？）」)...  She even gives her signature Lustatem a heroic upgrade: "The Breath of Justice, Blustatem" (「正義の息吹ブルーステアーテム」).  Amusingly, each of these names is a nod to the original Megaman in some capacity.

Typically localized as "the Blue Bomber", the "Blue Metal Hero" (「青きメタルヒーロー」) is Megaman's ring name in the Japanese and American versions of Super Smash Bros. For 3DS / Wii U (quick tangent:  I realize that Nintendo thought this was a clever play on words, but Super Smash Bros. For is not grammatically identical to Super Smash Bros. 4).  "Metal Heroes" is also the subtitle of the Japanese version of Megaman 8 (「ロックマン８ メタル ヒーローズ」).  "Bluste", in Japanese, is an obvious play on "Blues" (「ブルース」), the whistling older brother of Megaman whom we know as "Protoman".  To preserve the reference in English, we rendered the name as "Protogirl Bluste".  "The Hero of Justice (?)" (misspelled "Heroe?" in the original Japanese) is a rather generic superhero moniker.  If memory serves, Duo refers to Megaman by this name in the Japanese version of Megaman 8 (don't quote me on that one, though).  To eliminate the redundancy of the near-identical names, we decided to combine the monikers; Luste introduces herself as "the Metal Hero of Justice, Protogirl Bluste", and she's referred to as "The Metal Hero" wherever her real name wasn't used in the original Japanese.  If the original used a question mark, the punctuation was preserved in our localization.

Okay, that's enough about Luste.  Onto the real newcomers: 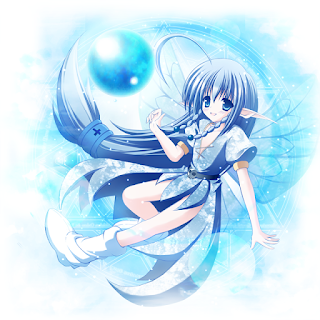 This caring, easygoing little fairy doesn't have a malicious bone in her body.  Perpetually optimistic, she chases after her goals with unstoppable zeal (when she has a goal to chase; when she doesn't, she doesn't really try to do anything...).  She has a curious attraction to all things round and smooth.  She often speaks in the third person and prefers to go by her nickname, "Ru".

Strudel was designed by Shizuku (also known as Tanuki Mask), a talented artist with an adorable art style.  When Strudel's design was submitted to WOMI, Shizuku gave her the name "Strudel Totenkopf".  "Strudel" means "swirl" or "vortex" in German; you're likely more familiar with the flaky pastry bearing the same name.  "Totenkopf" is the German name for the skull and crossbones design that we more commonly know as the Jolly Roger; it's plain to see why WOMI dropped the surname for the official release. 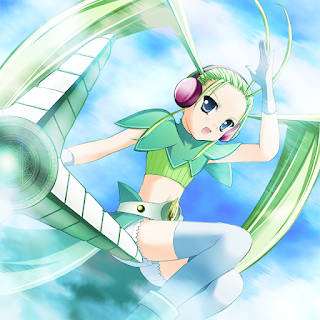 The hard-working new leader of the Special Forces division of Rosenkreuzstilette, Doris Warmind (pronounced "varmint") is quite skilled at keeping her cool and coming up with effective attack strategies during battle.  Unfortunately, her occasional carelessness and lack of real-world experience often cause her to slip up at the most inopportune times in spite of her considerable intelligence.  Although she is well-read and scholarly, her language is quite crude.  Doris hates to lose as much as she hates being teased for her size.  She idolizes Schirach (who created her boomerang, Fesselspirale) and has a one-sided rivalry with Luste.

Doris was designed by Hissatsukun (Tsubasa Mizuno), a professional manga artist that, like WOMI, specializes in adult comics.  A handful of Hissatsukun's comics have been released in English by FAKKU (naturally, this link is decidedly not work-safe).

Doris is a nod to Gyroman from Megaman 5 as well as to Web Spider (Megaman X4).  We changed her name from "Dolis" for obvious reasons: "Doris" is an actual German name, whereas "Dolis" is not. 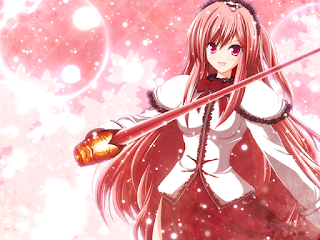 A child of nobility trained in secret as a magic knight, Pamela Arwig (pronounced "arvick") is the commander of Schwarzkreuz and reports directly to the Pope.  Having been raised away from the public eye, not much is known about her abilities.  Pamela is straightforward and sensible, though she tends to come across as haughty and sanctimonious as a side-effect of her high-class upbringing.  She has no doubts whatsoever regarding her concept of justice and will stop at nothing to punish sinners and heretics alike.  Pamela insists that she is not a Magus; she is convinced that her magical talents are the blessings of God Himself.

Pamela was designed by Alphes, the resident artist and illustrator of Twilight Frontier.  Alphes' artwork graces the covers of many titles, including Immaterial and Missing Power, Scarlet Weather Rhapsody, Hopeless Masquerade, Super Marisa Land, MegaMari, and Grief Syndrome (to name just a few).

The Ys fanboy in me is overjoyed to see that Pamela is a walking nod to series' protagonist Adol Christin (with a bit of Megaman X4's Colonel thrown in for good measure),  Her home, Burkhardt Castle, is a full-blown homage to Valestein Castle from Ys III: Wanderers From Ys. 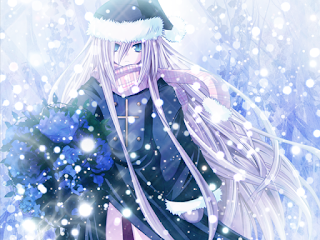 Always bundled in thick clothes to counteract an extreme case of hypothermia, Eifer (pronounced "EYE-fer SKOO-teh)" gives the impression of being cool and in control despite her youth.  However, she is prone to violent mood swings; under the wrong circumstances, she can become a rage-obsessed monster.  She has a sharp tongue and seems to harbor a deep-seated resentment towards Freudia.

Eifer was designed by Zaku6 (Zakuro Aburidashi), a professional manga artist specializing in adult comics.  Zaku6 is the artist behind The Sunflower Like An Owl, an adults-only Rosenkreuzstilette artbook (with commentary by Zaku6 and Hissatsukun). 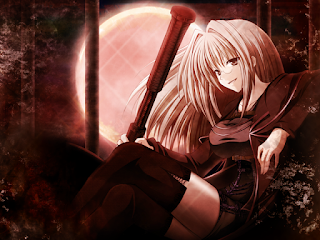 A former member of Rosenkreuzstilette, Schirach (pronounced "Shirock Fueller") has the personality of an annoying older sister.  Her dignified manner forms a stark contrast with her crude and candid speech.  She enjoys the thrill of battle even more so than Trauare.  It doesn't matter to her if she's on the winning side or not; Schirach absolutely loves a good fight and will do whatever she deems necessary to get what she wants.  She has been absent without leave for years...

Since I have a feeling someone will try to invoke Godwin's Law: "Fühler" is an actual German surname, so there's no need to change her name to "Führer".  "Führer"is German for "leader", whereas "Fühler" is German for "sensor" or "feeler".  Given Schirach's role in the story, the latter is more appropriate in-context. 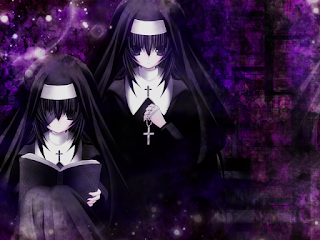 Recht and Link have been inseparable since the day they were born.  Recht is polite and mild-mannered, but extremely shy when it comes to interacting with others.  She is blind in one eye and always wears an eyepatch to keep her bad eye hidden.  Recht loves reading and prefers spending her time in the library.  Link, on the other hand, is bright and cheerful.  She openly speaks her mind and will not hesitate to antagonize those who get on her nerves.  She is fiercely protective of Recht and shows no mercy to those who would harm her.

Both Recht and Link were designed by Redmoon, a diehard Rosenkreuzstilette fan who submitted nine different character designs to WOMI's boss design contest.  After much thought on the matter, we decided to swap the L's and R's in their names.  First off, the Refraktia twins' given names are plays on the German words for "left" and "right".  "Lecht" and "Rink" have different meanings than "Recht" and "Link" (try it in English: "reft" and "light" don't mean the same thing as "left" and "right").  Second, 「リンク」 is quite well-known in Japan as the hero of The Legend of Zelda; it just wouldn't feel right to break this referential link.

The Refraktia twins are a clear nod to Geminiman from Megaman 3, with a touch of Split Mushroom (Megaman X4) and Armored Armadillo (Megaman X).

There's one more new face in Rosenkreuzstilette Freudenstachel, but that's a surprise I'd rather not spoil before the game is even released.

Oh, while we're on the subject of RKSF's release: 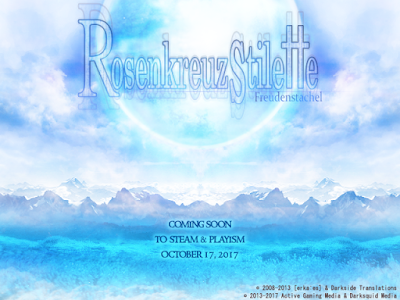 That's much sooner than you were expecting, huh?  Well, have fun!  We'll continue with the Development Diary after you've had a chance to play around with the game.