Hello there Schwer and Schwer Alike readers, it's Justin, here with some things to say about recent events about the Rosenkreuzstilette series.
Besides that little preview of Trauare's sprite during development shown in the previous post, there has not been any official updates from [erka:es] regarding RKS in general since November last year. One good thing is that the full release of ~Freudenstachel~ is just a few months away. I predict it will come around August 15th, 2010 the latest, so it's great to know the wait for the first official sequel to RKS is almost over, unless it get pushed ahead (which we hope doesn't happen, since Freudenstachel has gone through three long years in development, and two playable demos).
The RKS Wiki, in my personal view, is currently looking well, aside from a lack of a logo and suitable color scheme, but the well-written content on the wiki is what makes up for it. It's one of the most well-written wikis that I've ever seen (how everything is written, not how accurate to RKS the information is, and I'd like to thank everyone for your great contributions, and for making the Wiki great. And there are also a few noteworthy things that have been posted on Grolla's Dungeon that are somewhat worth checking out. (And since we're on the topic of the Dungeon, I'd love to remove all the cruddy advertisements, but I don't have any spare change to by the "credits" needed to do so.)
Now let's talk about deviantART for a second, just to get it out of the way. Now I'll agree with Viper and say that it is true, there haven't been much on DA to change the somewhat bad reputation of artwork done by the English, but it is slowly (and I mean slowly) increasing thanks to the removal of artwork that should have never seen the lights of day (anything anti-RKS or Super C$ap "fanart"). In fact, not too long ago, I posted two things we could do to get RKS more well-known on deviantART. The first method being the commissioning of multiple artists already on dA with great talent, and the second is the upload of RKS artwork (both official and unofficial) by the original Japanese authors themselves on deviantART. It may seem difficult, but those are the only two methods I can think of.
Well, I'll catch you all later.
Posted by Justin De Lucia at 9:07 PM 44 comments: 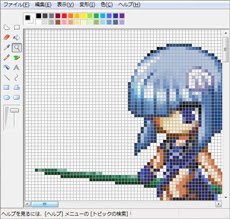 With thanks to SuperJustinBros. for taking some time looking into mof-mof, WOMI's NSFW homepage (and I do mean not safe for work or school), we have a first glimpse of Trauare Wrede's in-game sprite from Rosenkreuzstilette ~Freudenstachel~ and how it's made.

So for those who look down at MS Paint as an inferior art program for Windows PC: Who says MS Paint sucks now?
Posted by ViperAcidZX at 4:30 PM 7 comments:

We Enter a Quiet Frontier, Yet Again...

Hello everyone, ViperAcidZX here just to let out some drifting thoughts that's been going on his head for a while on this blog post.

Well it's been over a month since Letty has anytime to drop by at Schwer and Schwer Alike while dealing with his own personal issues. So far we have yet to hear any news coming from him or anyone else in this blog regarding his situation. So with that, all I can say to that is please keep Letty in your thoughts and prayers. God willing he needs all the support he can get from the rest of us... Another thing I'd like to add is that we're a long ways away from the eventual release of Rosenkreuzstilette ~Freudenstachel~ at summer Comiket. Either that, or more unfortunate events towards [erka:es] that will cause them to miss out on summer Comiket, and many fans will be forced to wait even longer until winter.

Now as for the deviantArt section of the Rosenkreuzstilette's English fanbase: I really hate to say this, but through Letty's point of view, I'm not seeing any improvements that's going to change deviantArt's already terrible reputation of "bad" Rosenkreuzstilette fan-art (i.e. steohen2's terrible attempt of making Trauare Wrede). Finding any that's particularly any good is just as Letty said in a previous blog post, "digging through the rough". An example of any recent fan-art of Rosenkreuzstilette that I would consider to be good is this rather cute artwork of Freudia Neuwahl by Yami-Mizore. Have a look.

I get the feeling that deviantArt is never going to have its share of quality fan-art for Rosenkreuzstilette, such as this artwork of Patchouli Knowledge from the Touhou Project, anytime soon. Probably not in decades. And I'd like to blame on past events committed against the Rosenkreuzstilette fandom (both English and Japanese) and [erka:es]. I, unfortunately, am going through some artist problems myself; the lack of motivation steaming from my frustration of my already sucky artistic talents as it is has prevented me from picking the pencil and trying to do something.

For those who don't know about this 4koma series, Touhou ~ Life of Maid is a 4koma series that centers the daily lives of the Scarlet Devil Mansion residence (Remilia and Flandre Scarlet, Patchouli Knowledge, Sakuya Izayoi, Hong Meiling) with other characters from the Touhou series. I consider this to be "the Lucky Star of Touhou 4komas"; colonel_aki combines a cute art-style with very witty humor that's guaranteed to bring a smile on the reader's face. A lot of the humor comes from the fannon-related stuff that the Touhou series is known for, such as Yuyuko being a glutton and Patchouli being an otaku. But when colonel_aki makes Patchouli into an otaku, there no words to describe it.

There's also some suggestive humor in this 4koma series (such as PAD jokes and Sakuya's insecurities of her lack of bust size, because Sakuya is actually flat or small-chested in the Touhou series) and some references to video games and anime that you'd expect to see from Lucky Star made in Touhou ~ Life of Maid. And the beauty of it all is that there is no actual dialogue, but the readers can grasp what's going on in the 4komas that even English readers will have a laugh of what's going on. This is a 4koma that I highly recommend for 4koma fans and Touhou fans to check out.

You can read this 4koma series at colonel_aki's pixiv page (which he also has other artworks that's worth checking out, such as his Lucky Star fan-art and you can see where his inspiration comes from), or this collection dedicated to Touhou ~ Life of Maid here at Danbooru. Be warned though, Danbooru has NSFW ads for h-games and perverted merchandises from the J-List. You have been warned. While I'm on the subject of Touhou ~ Life of Maid, KamiNekoYu of YouTube has created an animated version of the 4koma series, granted they're not in chronological order of the 4komas.

Well this is ViperAcidZX crawling back into his hole, counting down the days until Sin and Punishment: Star Successor arrives to the United States...

P.S. If anyone at deviantArt was offended by my earlier comments, I do not intend to offend anybody (except for steohen2 and his "Trauare") and I apologize for it. But if you insist in pointing your rage at someone, please directed it towards me. Thank you.
Posted by ViperAcidZX at 4:37 PM 8 comments: