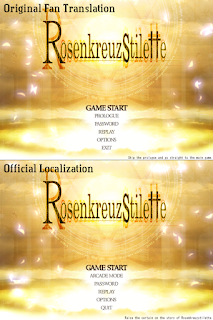 During the lead-up to the official English release of Rosenkreuzstilette, I figured it'd be a good idea to start a Developer Diary to give everyone a behind-the-scenes look at our work and show off some of the tweaks we've been making under-the-hood to make the game the best it can be.  Every now and again, we'll upload a few screenshots with a bit of background and our rationale for making the decisions that we did.  If we changed anything from the original, rest assured that each change has been made with WOMI's expressed support.  Hell, in some cases, he was the one that asked us to make the change in the first place.

For our first entry, let's have a look at something everyone will encounter within seconds of launching the game:  the Title Screen.  First off, you'll notice that we decided against integrating an English rendition of the title ("Blades of the Rose Cross") into the game's logo.  This is for two reasons.  First, title is already a mouthful, especially for non-German speakers.  Second, given the naming scheme for each game and bonus mode in the series, localizing the main logo would set a messy precedent for every logo in the series to follow.  How would we integrate every word of "Rosenkreuzstilette Freudenstachel ~Blades of the Rose Cross - The Sting of Joy~" into the logo without having the elements of the logo compete for the player's attention?  From a design standpoint, it just wouldn't work to our satisfaction, so we opted to take the purist route and drop the localized subtitles from the game's logos.  The localized renderings will still be present in the finished game (they're the names of the Final Stage of each game mode), so it's not like we're leaving anything untranslated. 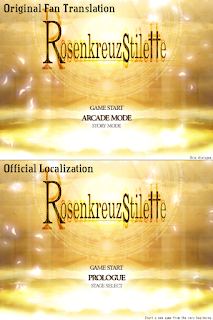 Now, you might have noticed a subtle difference in the screenshots above and to your left.  Yes, the order of the menu items has been changed.  This tweak was made in order to address an issue pretty much every player has encountered during their first time playing the game (myself included).  Now, when you launch a game for the first time, it stands to reason that "New Game" or "Game Start" would be the option you'd pick to, y'know, start a new game.  In the original version of RKS, this wasn't actually the case: "Prologue" would start a new game, and "Game Start" would skip the opening stage and take you straight to the Stage Select Screen.  So, we tweaked the Main Menu to be more intuitive.  In addition, it makes more sense to select your game mode before choosing your starting point instead of afterwards, so we reversed the order of these selections accordingly.  It's no surprise that a good chunk of the people who decided to do a blind Let's Play of Rosenkreuzstilette had absolutely no idea that there was an entire stage that they might have missed just because they made the logical choice at the game's Title Screen.  We felt that this was an issue that just had to be addressed in the official English version, so we've done just that.

Also, you might notice that we no longer have a character limit for the flavor text in the bottom right corner.  That's right: the descriptions of each menu item can now accurately describe what each menu item actually does instead of being a truncated mess.

Well, that's it for this first edition of the RKS Developer Diary.  Feel free to comment on our progress, including whether or not you agree with our decisions.  If there's something in the game that you're curious to know about, just drop us a line and we might devote a future Developer Diary to it.