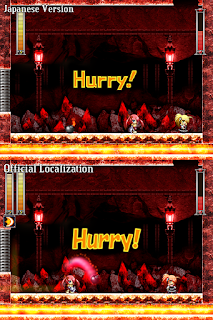 This time around, we'll be looking at a couple of the visual references in Rosenkreuzstilette.  One of RKS's claims to fame is its many sight gags, which pay homage to a number of old-school classics.  As many of you already know, we're quite particular about styling sight gags just right to subtly reinforce the developer's intended nods.

Let's start by having a look at our favorite fiery redhead, Zorne Zeppelin.  Zorne's fighting style is a direct homage to Hudson's Bomberman series, what with her old-fashioned cross-explosion fragmentation bombs and all.  As much as I hate to admit it, her prosthetic arm is modeled after the character's redesign in Bomberman: Act Zero.  I'd prefer to pretend the game never existed and credit that element of her design to the title character of the second Prince of Persia reboot, but I can't live in denial forever...

Zorne's character design aside, each of the Bomberman visual elements and mechanics in RKS is a reference to Super Bomberman 2 for the Super Nintendo Entertainment System.  For example, once Zorne's vitality reaches 50%, a familiar warning message appears and blocks begin to fill the screen, leaving Spiritia and Zorne with only one minute to finish their fight before both of them are incapacitated -- just like Super Bomberman 2's Sudden Death mode, but with a slightly more forgiving time limit. 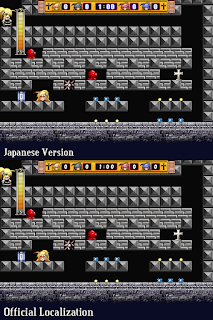 Now, we could very well have left the warning message as-is since it was already in English.  Admittedly, many translation outfits chose not to do any more work than they have to.  There's no reason for us to follow their lead, though; we believe anything worth doing is worth doing right.

(...Why do I get the feeling someone is going to take the above statement out-of-context and misinterpret it as a personal attack of some kind...?)

Anyway, taking a cue from Bomberman's 2002 release on the Nintendo GameCube, we've updated the warning text to match the look of its counterpart in Super Bomberman 2 while using the higher-resolution font of Bomberman Generation.  We followed this same train of thought with the Head's Up Display (HUD) for the secret area hidden in Zeppelin Stage IV.  And the results?  Well, they speak for themselves. 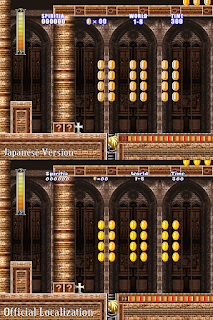 Naturally, we followed the same principle with the Super Mario Bros. reference in Schwer-Muta's Stage.  Truth be told, we weren't satisfied with the HUD for this stage in our fan translation and made a point of revisiting it to properly polish it off, redesigning the coins and counters to better fit RKS with the Super Mario universe.  The HUD's palette matches that of the Super Mario All-Stars version of Super Mario Bros., while the coins are modeled after the currency in Super Princess Peach.  It was a bit of a toss-up deciding which font to use for the HUD: we could stick with the classic look that the series has had since Super Mario 64, or we could go with the more modern interface of New Super Mario Bros. U. Ultimately, the decision was a no-brainer -- old-school all the way.

...In case anyone is wondering: yes, there are exactly 100 coins in this room, and collecting all of them does just what you would expect.  So does letting the timer run down to 100 (or letting it expire completely), so don't dawdle!

Well, that's all for today.  Thankfully, my new glasses are ready, so I can resume my usual pace now.  I'm a bit surprised at how much extra programming work is needed to implement each individual subtitle for the voice clips in RKS (though, in all fairness, I shouldn't be).  Because many of the voice clips play randomly, additional programming logic is required to catch which randomly-selected voice clip was chosen and display the corresponding subtitle before returning control to the game.  The extra work in this department is a bit tedious and nowhere near as fun as the graphics work given its repetitive nature, but it's ultimately worth doing.