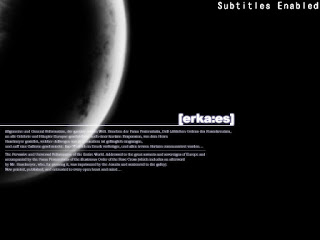 I've been wanting to make this post for quite some time.  Thanks to my day job, changes around the homestead, a series of untimely developments, and a bad case of insomnia, I had little choice but to prioritize the urgent over the important for much longer than I'd like.  Now that the interruptions have been taken care of (and my sleep patterns seems to have returned to normal), I'm proud to showcase what may be the most significant improvement to the Rosenkreuzstilette localization since our original fan translation: our real-time subtitle feature.

The first time you boot up the new version of Rosenkreuzstilette, English subtitles will be enabled by default.  If you would like to disable subtitles at any time for any reason, just tap the F2 key to toggle them on or off.  The game will immediately save your choice to config.dat, so if you're a purist who'd rather not clutter up the screen, you don't need to worry about disabling subtitles every single time you launch the game.  Originally, F2 toggled whether Vertical Synchronization (V-Synch) was enabled or not.  In version 1.06a, [erka:es] decided to disable the hotkey since activating V-Synch required a restart, rendering a real-time V-Synch toggle effectively useless.  We decided to put the disabled hotkey code to good use.

As tempting as it would be to go over every character's dialogue and point out all of the references present in their voice clips, I have to save something for the full release, don't I?  So, rather than doing that, I figured I'd go over some of our localization choices with a bit of trivia thrown in.  As usual, feel free to leave any feedback in the comments: 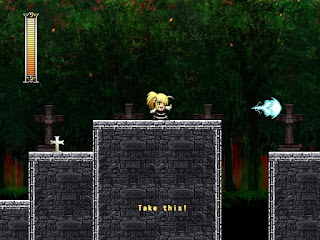 Tia cries this out the moment her vitality falls below 50%.  Those of you who have played through Megaman X4 in the original Japanese might recognize this cry as the same one Zero uses in the same circumstances.  Interestingly enough, variants of this line are used throughout the series - by Zero, X, and even Vile.  We decided to use X's rendition from X8 for Tia, and save Zero's more iconic X4 rendition ("It's not over yet!") for Freudia in Freudenstachel. 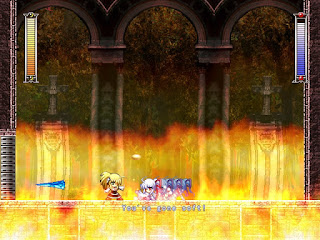 One of Freu's one-liners is a nod to the boast Frost Walrus uses in the Japanese version of Megaman X4.  Unfortunately, Capcom USA decided to cut the voices for the eight boss Mavericks instead of dubbing them into English, meaning there is no official English rendition of this line we can reference.  Literally, the two say variants of, "I'll lay you to rest on a bed of ice"; we revised the line to sound more like the subtle threat it's supposed to be (and downplay the cheese in the "ice" pun).

If you can believe it, this Zorne line is actually a reference to the Japanese version of Colonel's "I'll show you no mercy! Now, get ready!". Unfortunately, the British mannerisms Capcom decided to give his character don't flow well from the fiery redhead, so, unfortunately, the reference just had to go.  We rephrased the line to sound like something Zorne would actually say.

If you choose to fight Trau before defeating Zorne, Trau uses the exact same boast as Megaman X4's Jet Stingray, which was also left on the cutting room floor by Capcom USA's decision to remove the boss Maverick voices.  Jellyfish are quite lethal because of the poisonous barbs that cover their bodies; even a dead jellyfish can kill you if you touch their corpse.  There are two possible interpretations to the Japanese in this line: Trau and Stingray may be implying that even the dead stand a better chance against them than you do.  They might also be insinuating something to the effect of, "it looks like this jellyfish still has some life in her".  Which of these interpretation do you prefer? 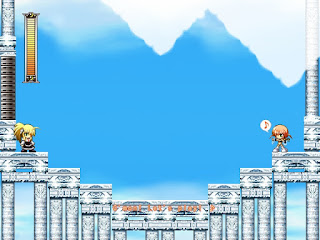 Yep, another deleted X4 reference.  "Hero-gokko" is actually a play on "Oni-gokko", the Japanese name for the game of Tag.  Japanese children love giving traditional games new names when they've implemented rules of their own (see: "Old Man" in Higurashi no Naku Koro ni, a variant of Old Maid that ultimately plays a strong narrative role in the story).  Luste refers to Tia by name, whereas Split Mushroom uses "kimi" ("you") to refer to both X and Zero with the same line.  Unlike Mushroom, Luste's AI actively seems to be playing Tag with Tia, rushing to the other side of the room whenever Tia gets close.  This line is a perfect example of why a literal translation isn't necessarily an accurate one.


Sichte Meister
"For the honor of RKS, I shall strike you down!"
「エルカーエスの誇りにかけて君を倒す！」
(Jet Stingray, Megaman X4)

More X4 references?  It looks like Isemiya and WOMI love the game just as much as I do.  Sichte's line is a variation of Stingray's, replacing his reference to the Repliforce army with RKS.  We're still on the fence as to whether we should preserve the (officially-untranslated) reference as-is or if we should go for a slightly more fluid, "In the name of RKS, I shall carry out your sentence" (remember, Tia has been charged with treason -- a crime punishable by death -- and Sichte is her commanding officer).  Your thoughts?

Dio is a fairly popular character among Japanese game developers, and many of their original characters are inspired at least in part by the deranged vampire.  His iconic Stand, "The World", allows him to manipulate time itself, and the words he shouts when he does so are instantly recognizable, even to those who aren't Jojo fans.  Project Touhou's Sakuya Izayoi, Castlevania's Zephyr, and RKS's Sichte Meister are just a few examples of the characters he has inspired.  Given how many different official renditions of "toki yo tomare!" there are to choose between, we decided to go with the one that would resonate best with RKS's target audience.  Given no less than five different characters in the Castlevania mythos use Dio's line (Richter Belmont, Soma Cruz, Julius Belmont, Jonathan Morris, and Zephyr), it only made sense to follow their lead and render the line as, "Time, be still!". 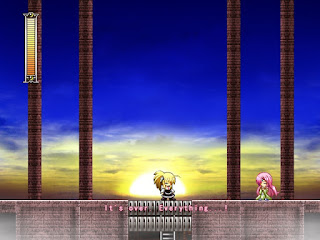 Yet another Megaman X4 reference.  On one hand, the major characters of X4 all have their dialogue dubbed in English.  On the other hand, their lines are somewhat over-localized: "Stay with me, Brother...!" doesn't mean the same thing as "Brother, protect me...!"...  Given Liebea is thoroughly an embodiment of Iris's character -- a pacifist caught in the crossfire who just wants the ones she loves to stay safe -- we decided to go with the official localization, even if it's not 100% accurate. 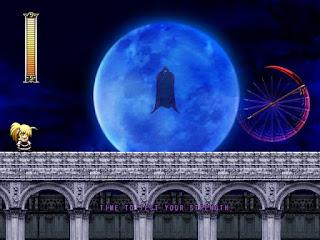 Believe it or not, one of Seyfarth's victory cries is a reference to the Maverick Hunter X incarnation of Armored Armadillo.  In Japanese, Seyfarth and Armadillo both follow the creed of the samurai.  Unfortunately, this element of Armadillo's personality was lost in translation; in English, he comes across as stoic and stubborn instead of honor-bound and dutiful.  In Maverick Hunter X, "Tatakai datta..." was rendered as, "It was a good fight..."; we revised the line to fit better with Seyfarth's battle-hungry personality.

I'm tempted to keep going and shine a spotlight on the remaining characters, but this post is already long enough as-is, and I need to make sure that at least a few of the references can still surprise you in the final release.  We're regularly submitting debug builds to the publisher, so it's only a matter of time before the game is ready for release.